For a particular persons birthday, I had decided that I was going to make her a birthday cake. Most of the time I come up with ideas in my head and when I actually come to making them, they don’t exactly turn out how I had hoped, but for a first attempt at this particular style of icing, I think it actually turned out looking okay. 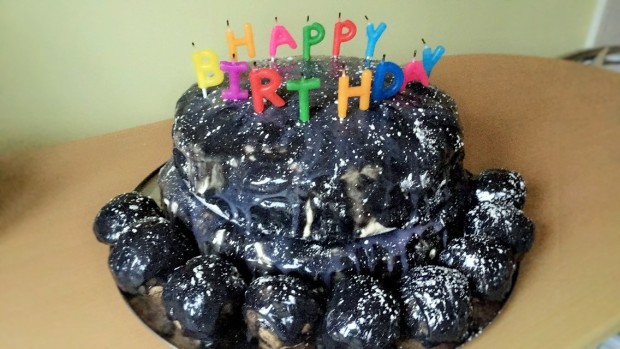 I had decided to make a two-tiered cake, where by the bottom was a chocolate sponge, and the top tier a classic vanilla sponge. I planned to cover the cake in buttercream and then pour a mirror glaze over the top. I was aiming to reciprocate the look of all those galaxy cakes that had been posted all over Instagram, Twitter, Pinterest and YouTube.

I made the cakes the day before actually making and placing on the mirror glaze in order to allow for the cakes to cool completely and for the buttercream icing to set as much as possible! In order to create the galaxy effect I made the mirror glaze, separated into four different bowls and added gel food colouring to each. I had black, blue, pink and purple. After mixing the colours in thoroughly I poured in the blue to the black and swirled (DO NOT FULLY STIR) before pouring over the cakes that were heightened in order to allow the excess to drip off the sides. I then drizzled over the pink and purple before gently smoothing over with a palette knife to create the swirl of the galaxy.

To create the sparkle, I flicked over edible glitter in both white and black before letting set in the fridge and finally assembling one on top of the other. 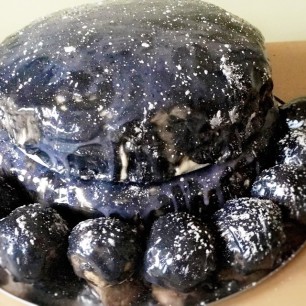 Overall I think the cake turned out pretty well for a first attempt, and it tasted good so everyone was a winner! In future I will make sure I have all of the tools necessary to create a smooth cover and base on the cakes with the buttercream as the uneven surfaces led it to peak through in some places.

I hope you have enjoyed reading my post and I look forward to writing another soon.

The Life of Kathryn Jade